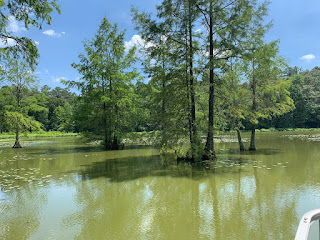 That is the plea of the disciples to Jesus. There was no supernatural impartation of faith. Instead, the reply they received probably surprised them. They were simply told that if they had faith as small as a mustard seed they could uproot a big tree and replant it in the sea. The example seems a little ridiculous — obviously hyperbole. I have never heard of anyone moving a tree other than by some pretty hard work.

I do remember many years ago an older woman telling me that if she had enough faith she would never die. In her eyes, any lack of healing and renewing of the physical body was due to insufficient faith. There was no moving her from her belief, or as she considered it, her faith.

So, reading today’s passage causes me to ponder what is meant by faith here? What is it the disciples are seeking? Of course, it would be easy to say they wanted more faith in God and leave it there. However, that would not do justice to the text. It simply does not read that way.

The example given points to faith being paralleled to obedience. The passage says that the tree would “obey” the command to move to the sea. The second illustration is about slavery. Obviously somewhat distasteful to twenty-first century eyes. In the story the poor slave came in from hard labour and was expected to do more work around the house and serve their owner. The text even makes it clear that there was no kindness or consideration for the slave simply an expectation of obedience to their tasks.

This seems to be the expectation for the disciples that they do all that has been ordered them. In this passage obedience is faith. I turned to the previous chapter to read the whole dialogue to try and get an idea of the things they were expected to be obedient in.

It is quite revealing. The stories there are all of care for the poor, sick and needy.

I think faith is multifaceted Today’s story seems to illustrate one aspect of it — faith has an outworking of care for the poor and needy. It is in obeying this command that faith is increased. Therefore, I can join the disciples of old and say, “Increase my faith.”