A Visit to the Holy Island of Lindisfarne 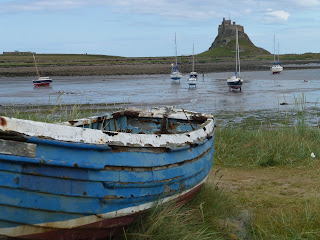 It was a perfect day. The sun was shining and the sky was blue. The wind was a little chilly. It was what we describe as an “on-off” day. Our coats were on and off all day as we repeatedly moved from shelter to open countryside. It was on this lovely day that we visited the Holy Island of Lindisfarne

In the morning we had driven to Berwick-on-Tweed to visit our friend, Chris. We were delighted that Chris was looking so well after his long months of struggling with illness (Please send healing thoughts his way as he continues his journey towards recovery).

Chris felt strong enough to join us for the afternoon on Lindisfarne. Little did he know that our visit was going to become an eight-mile hike! We arrived at the island at the end of the safe crossing time. This is the time we love the most, when the tide cuts the island off from the mainland for a few hours.

Lindisfarne is a special place. It lies off the North-East coast of England reached by a tidal causeway. It was St. Aidan who arrived at the island in the seventh century. He came from the monastery on Iona, Scotland. He is accredited with bringing Christianity to England. There is a feeling of peace on the island. It is what the Celts used to call a place where “the air is thin.” There is closeness between the natural and the spiritual. The peace is tangible. It is in the air. 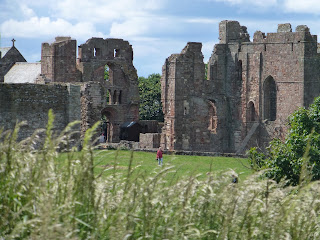 We walked around the perimetre of the island. As always, when one moves a little way from the centre of a popular tourist spot the countryside becomes deserted.
We have spent weeks, days and hours on the island years ago. Nevertheless I was amazed at how familiar it all was as we walked around the almost deserted shore.  We remembered the various bays, the quarry and the paths as if we had walked them yesterday. For Andy and I it was a journey which kindled many memories. As we walked our conversation was often punctuated with “do you remember when …”. 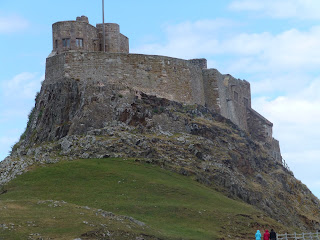 We walked across the sand dunes covered with gorse and wild flowers. We introduced Chris to the wilder side of the island. As we walked we dropped into the different bays. Firstly, we visited the long expanse of golden sand with sound of sea gently lapping at the water’s edge. Then the rockier bays with the cliffs full of nesting birds. After which we came to the bay where there are great slabs of rock. This was where we sat a while and ate our sandwiches. It was a magical place as we watched, with great delight, the seals swimming in the bay. At one point we counted about fifty of them.

Sadly, we couldn’t linger there all day but moved on to see more bays. We were beyond sandy beaches now and the coastline was all pebble. We walked along coming nearer and nearer to the castle. The castle was built around 1550, although it underwent much renovation in the early twentieth century. We couldn’t resist a peep into the nearby lime kilns where our children, and, subsequently, our grandchildren played. 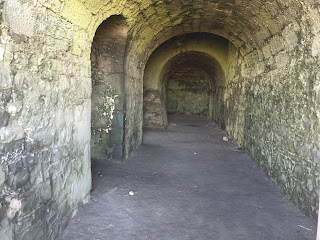 As we walked from the castle, views of the priory were in front of us and to our left the harbor. The sun was starting to set and the whole harbor was clothed in golden light.

A stroll through the village, including a wee taste of Lindisfarne mead, completed our circle. The tide was receding, we returned to the car park, happy that we had been blessed with such wonderful day.