Two blokes and a bird! 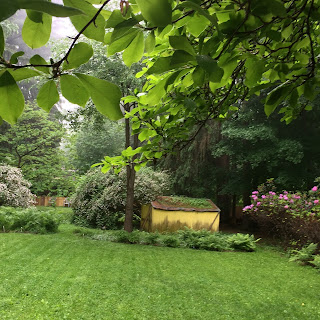 Today is Trinity Sunday. It is a day when traditionally the triune nature of God is considered and celebrated. In the Christian tradition the Trinity is a mystery. There is no adequate explanation although many attempts to understand it have been made. They may be helpful, but Trinity still remains a mystery. I am content to let it be so.

All language about God is metaphor. Human language is inadequate to explain fully the mystery of God. By using metaphor we are saying, “God is a bit like this”. God will always remain more than we can ever think or say.

Traditional language has expressed the Trinity as Father, Son and Holy Spirit. Years ago, we realised that the patriarchal nature of this was unsatisfactory. Even when one considers the Spirit as feminine, it still leaves an unbalanced Godhead with a male majority. In the catholic tradition the high profile given to Mary, although not as part of the Trinity, does at least bring more feminine balance when considering the mystery of God.

Augustine suggested Lover, Beloved and the Love that is between them as a picture of the Trinity. Although another good attempt at a metaphor to help bring understanding to the Trinity it too has patriarchal overtones. One being a giver (a provider) while the other is the recipient.

St Patrick used the three-leafed clover or shamrock as a metaphor to try and explain the Trinity. There is a great clip as the “Irish Twins” together with St. Patrick attempt to explain the mystery of the Trinity. Well worth a watch.

In the prayer book of our community, Way of Living, the language used is Father/Mother, Child and Holy Spirit. This too is inadequate. It was a best attempt to try and reflect a more egalitarian view of the trinity. We considered using parent, but decided that Father/Mother was more intimate, more reflecting of relationship.

In these times, family structures and roles are changing. Traditionally Fathers were seen as more distant, providing for the family and protecting the family while mothers were seen as the heart of family, nurturing and caring for the family. That no longer holds true. I know many women who provide for their family and many men who are nurturing and caring. If using a double epitaph, maybe for some families it would be mother/mother or father/father. Worth pondering how the changing nature of family informs our view of Trinity

Sometimes we are so ingrained with the Father/Son/Spirit language that we forget it is metaphor. We forget that the writers of the New Testament were trying to find culturally relevant ways of expressing relationship with God. Many years ago I read a challenge which I want to issue today. I can’t give credit to the author as I can’t remember the source. (I suspect it was somewhere in FIorenza’s writings). It was to call exclusively God “Mother” for at least a three month period. The rationale being that only when one is as comfortable with calling God, Mother as one is with using Father can the fullness of God start to be perceived.

Today’s gospel passage is John, chapter 3. It is a passage that is associated with the Trinity. (Perhaps worth mentioning here that the word Trinity is never used in the New Testament, it is a later theological term which originated mainly in defense of heresies).  John 3 talks about new birth. Giving birth is feminine imagery. So right here, in this text, which mentions all parts of the Godhead is a predominantly Feminine image.

In the story, Nicodemus came to visit Jesus in the night. Nicodemus said that he recognised that Jesus was from God. Jesus told him that he knew this glimpse of the realm of God was only possible because he was “born from above”. There follows a discourse on the dynamics of new birth.

Reading this passage anew I wondered if we have got it all wrong about being “born again”. It has often been talked about as an experience not to be repeated, a one-time event, a start of a religious journey, an entrance into a life which may exclude others who haven’t been “born again”.

As I read the passage I realized that Nicodemus was born again as he recognised something was from God. It wasn’t something he actively sought. He came to Jesus because of what he had seen not because he wanted to receive something. He was drawn through inner revelation.  Maybe, as we journey through life, every time we see something of God reflected we experience this divine feminine process of being born anew. What a wonderful thought. A spark of the divine in every human being which reacts to people, sights and experiences resulting in us being born anew.

This morning, our garden is clothed in mist. The trees are in bloom. The birds are chirping. Everything looks bright and clean. God is reflected there. Perhaps as I marvel at it something in me is born again.

Being born anew is part the mystery of the trinity . . . I am content to let it remain so.
Posted by Jane at 3:17 PM